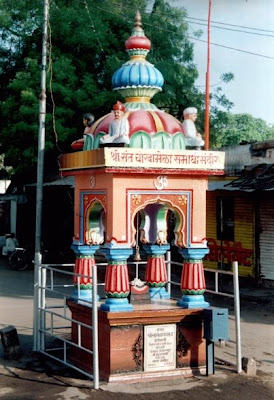 Chokhamela or Chokhoba was a 14th century saint poet. He was a varkari. There is a very little recorded history of Chokhamela's life. Chokha belonged to the cast of untouchables. At that time untouchables were not a part of social fold. They were neglected. They were thought to be impure. They were expected to live off on the leftovers given by the upper-castes. They were denied education. They were even forbidden to enter the temple. All these things are reflected in Chokhamela's poetry. He was contemporary saint-poet of Jnyaneshwar, the late 13th century poet-saint and philosopher.
Namdev was another contemporary saint. He had a great influence on Chokhamela. Chokha considered him as his Guru. It is said that this great saint-poet died with other laborers when the part of the fort they were helping to build, collapsed on them. Thereisalso a popular legend that Chokhamela's friend as well as Guru went to find his remains and picked up those bones which murmur "Vitthal Vitthal" The bones were buried outside the gate of main temple of Vithoba in Pandharpur. And a shrine is built there. The Varkaris and devotees take the darshan of this shrine. There is also one beautiful shrine built at the place where he died in Mangalwedha
Labels: Shri Sant Chokhamela
Newer Post Older Post Home