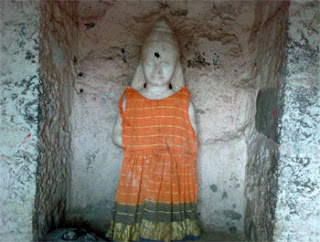 Kanhopatra (15 th century) is a female Hindu Varkari poet-saint. Kanhopatra wrote Marathi abhanga compositions, which deal with her devotion to Vithoba, the patron deity of the Varkaris and her struggle to balance this with her profession. Not much is known about the historical Kanhopatra's life. Much of the legends that deal with her life concentrate upon her death when she chose to surrender to Vithoba rather become a concubine of the king of Bedar. Kanhopatra was a daughter of a courtesan named Shyama, who lived in the town of Mangalwedha. Kanhopatra was forced in the courtesans's life, though she detested it.Later, Kanhopatra withdrew from society and lived in Pandharpur, where the chief temple of Vithoba stands. She spent rest o 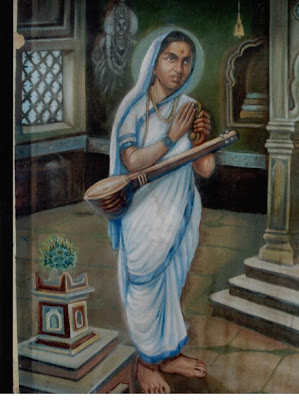 f her life singing and wrote ovi style poems as well as abhanga poems dedicated to Vithoba.Upon hearing the tales of Kanhopatra's beauty, the king of Bedar ordered her to be his concubine. When she refused, the king sent his men to get her by force. Kanhopatra took refuge in the Vithoba temple of Pandharpur, the central shrine of god Vithoba. Kanhopatra died there in mysterious circumstances. Though legend says Kanhopatra merged with the central image of Vithoba in form of marriage with Him, other theories suggest possible suicide or homicide for rebelliousness.According to legend, as per Kanhopatra's last wishes, her dead body was laid at feet of Vithoba and then buried, near the southern part of the temple. Here, a mysterious tree rose, which is worshipped by pilgrims today.Kanhopatra's dating to c. 1428 CE is related to dating to a certain Bahamani king of Bedar, who though never explicitly named in legends, is often association with Kanhopatra's legend.Kanhopatra's patron deity: Vithoba. 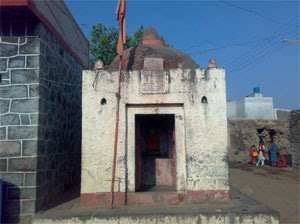 Kanhopatra's abhangas frequently portray her struggle between her profession and her devotion to god Vithoba, the patron deity of the Varkaris. Only 30 of her abhangas or ovis survive today. Twenty verses of her poems are included in the anthology of Varkari saints called Sakal sant-gatha. Kanhopatra speaks of her banishment from society owing to her family profession and social stature. She talks of voluptuous thoughts of others. She feels that perhaps she was beyond "scope of God's love". She acknowlegdes her God as the saviour of the fallen and tells him to save her too:
O Narayana (a name of god Vishnu, who is identified with Vithoba),
you call yourselfsavior of the fallen...
My caste is impure
I lack loving faithmy nature and actions are vile.Fallen Kanhopatraoffers herself to your feet,a challengeto your claims of mercy.
Kanhopatra is formerly included in the list of Sants, meaning saints in Marathi. Mahipati devotes a entire chapter in his text Bhaktavijaya extolling her devotion to Vithoba. She is cited as "an example of the real downtrodden and deserving people, persons that are saved by the merciful God". Kanhopatra's life is also retold in a 1937 Marathi film written and directed by Bhalji Pendharkar as well as a popular Marathi drama both named "Kanhopatra".(Source : Wikipedia.org)
Labels: Shri Sant Kanhopatra
Newer Post Older Post Home